Evolution of the golf ball

At the beginning of the 17th century, wooden balls for golf were replaced with balls made of wet horse or buffalo skins. The balls were stuffed with feathers, the skin was sewn and left to dry. The feathers increased in volume, the skin was compressed, and the ball turned out to be very hard, elastic, but terribly expensive. In the early fifties of the 19th century, a golf ball from gutta-percha appeared, a material resembling rubber was brought from East Asia. Gutta-percha ball was cheaper, but he was jumping to wherever he wanted. Soon the players noticed that the more scratches are on the ball, the longer and straighter his flight is. By the end of the 19th century, the aerodynamics of the golf ball had been studied. Special dents appeared on the golf balls, and today there are 336 dimples on the surface of a golf ball. In 1901 the first ball with a rubber core was made in the UK. Today, Titleist company produces eight types of balls, which differ in size, rigidity and spin. And the most high-speed ball was made by Tiger Woods, it was launched at a speed of 290 km/h. 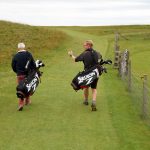 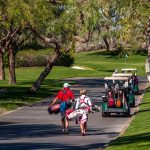 Types of golf clubsGolf gear
We use cookies to ensure that we give you the best experience on our website. If you continue to use this site we will assume that you are happy with it.OkPrivacy policy