If in developing countries, for example in China, which took 6th place with sales of equipment at $ 196 million, the number of players has been steadily growing in recent years, then in traditional game centers like the United States and the United Kingdom, specialists have to decide how to resist the decline the popularity of golf, especially among young people. The idea to make golf faster and more interesting, especially for young people, was realized by the most titled golfer of the world Tiger Woods. His company, engaged in the design of golf courses, in 2015 opened the club Bluejack National near Houston. It has a zone called Playgrounds – a field with 10 holes, which is much shorter than traditional ones. You can play any number of holes in any order. In the evening and at night the field illuminates, and the music sounds from the speakers. All the grass on the Bluejack National field is of equal height, there are no high grass areas, and all the bushes are removed. This is made for the convenience of players – they won’t waste much time looking for a ball. Thanks to this, 9 holes can be played in 70 minutes. SpeedGolf is also gaining popularity, the result depends on the number of hits and time spent on 18 holes. There is a trend to reduce the number of holes on the field, because the slowness of the game can be a serious problem – amateur golf should be more understandable, accessible, faster and more friendly to beginners. 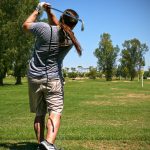 The popularity of golf in the worldModern Golf Trends
We use cookies to ensure that we give you the best experience on our website. If you continue to use this site we will assume that you are happy with it.OkPrivacy policy